A collection of gallery exhibitions Matt has exhibited in, as well as other events either organised or taken part in by Matt. 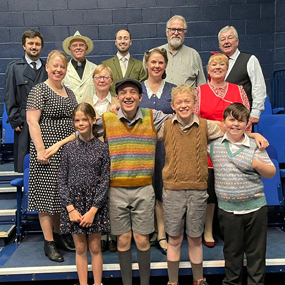 After earning his bronze, silver and gold medal Lamda qualifications in 2014, 2015 and 2016, in 2019 Matt was approached to take part in a stage production of ‘Goodnight Mr. Tom’ to take the part of the child psychiatrist Dr Stelton.

Originally to be performed at the Haymarket in Basingstoke in February of 2020 the Covid-19 pandemic forced the production to be halted for the safety of the cast, crew and audiences. As 2021 rolled around and the vaccination jabs were being administered, plans to reopen the show began, starting with video chat rehearsals and eventually physical rehearsals following the cast and crew being vaccinated and appropriate precautions taking place.

Three private viewing performances of the show were eventually held in October 2021 at the Central Studio in Basingstoke. These performances were Matt’s first ever time on a stage, and fortunately managed to remember all his lines. 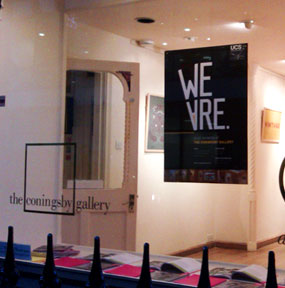 ‘We Are’ was a graphic design gallery exhibition hosted at the Coningsby Gallery in London. This exhibition featured works from a small number of reunited graduates from the University Campus Suffolk’s Graphic Design and Graphic Design Illustration Course to show their professional work from both during and after the course.

The day hosted hospitality with a variety of alcoholic and non-alcoholic drinks, along with a professional bar tender to mind the drinks.

As one of the graduates, Matt’s work was featured showing crafted typography based around Meccano from his course project where he created a brand and a sticker album style invite for a retro toy auction titled ‘Vintage’. Other pieces of his work were also show including packaging for Matts ‘Popcorn Picnic‘ event and personal stationery for 19th/20th century artist Egon Schiele. 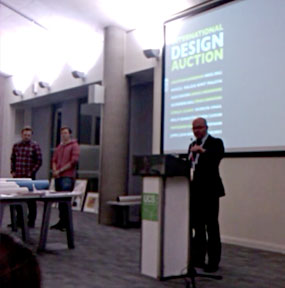 Matt was one of the lead members of a small team who organised the first ever Internation Design Auction at the University Campus Suffolk (UCS). This event was to raise money for the Graphic Design and Graphic Design Illustration course’s end of year show.

The auction featured lots donated by renowned designers, illustrators and design firms from all over the globe. Some of these names included Illustrators Gerald Scarfe and Brian Grimwood, design firm Pentagram (Texas), Artist George Underwood and many more.

The event featured over 40+ lots available, complete with hospitality with a selection of wines and non-alcoholic drinks that were served throughout the evening.

A variety of publication materials were crafted to advertise the event such as posters and video reels of the lots for people to see, as well as arranging a radio spot on BBC Radio Suffolk featuring one of the course members.

Overall, the event took in more than £1,800, making it the most successful fund raising the course had previously had, more than doubling what previous years have made.

Because of its success, the show was replicated at UCS with the following final year students taking on the auction in 2013 and the again in 2014.